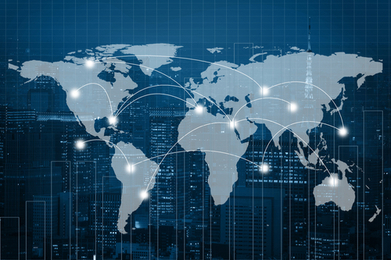 Once again, it’s time to find out about the major events that happened last week for you to be prepared to trade wisely. Here’s what you should know:

On Friday, the U.S. dollar rose, hitting 10-week-highs against the yen as risk appetite improved amid a more upbeat outlook on some major economies and the prospect of a trade deal between the United States and China.

The dollar index rose 0.4% on Friday and it posted its largest daily percentage gain in two weeks.

“Looking at the whole G10 (Group of 10 major currencies) space, there has been more follow-through from U.S.-China trade optimism that was already in the process of getting priced in during the month of February,” said Stephen Gallo, European head of FX strategy, at BMO Capital Markets in London. “Meanwhile, one of the biggest boosts to the U.S. dollar is coming from a weak yen,” he added.

Initially, the weaker than expected U.S. economic data weighed on the dollar initially, especially the manufacturing index, but the greenback rallied to trade higher on the day. In afternoon trading, the dollar index rose 0.4% to 96.307. For the month of February, the dollar index was up 0.4%.

According to Goldman Sachs Group Inc., the GBP rally has further to go as Brexit hedges are unwound. As the prospect grew of a longer delay to U.K.’s exit from the EU, the pound jumped to the highest since July.

The rally started after Prime Minister Theresa May once again staved off the threat of rebellion. Still, an increasing number of foreign investors who bought hedges since the June 2016 Brexit vote need to reduce those positions and that will mean continued support for sterling, Goldman’s market strategy chiefs told clients at a conference in Sydney on Wednesday. 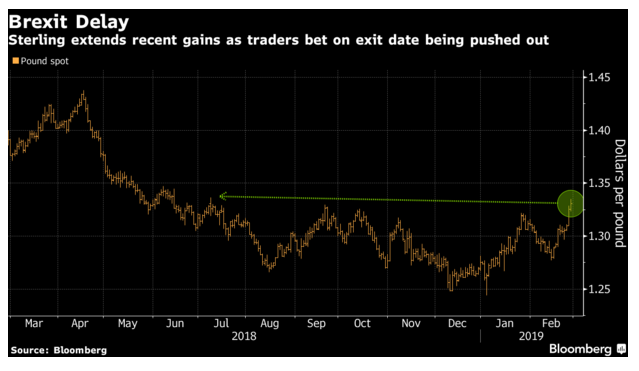 “When the hedges have to come off, the pounds are not there anymore because they’ve gone for good into corporate coffers, and so there is a good risk of an overshoot in the pound,’’ Rzymelka told the Goldman Sachs macro conference. He also added: “If Brexit is really bad, then clearly growth in the U.K. is going to look worse than in Europe, and on the other hand every foreign central bank is now being priced to cut rates. It doesn’t make any sense for the U.K. to price hikes.”

On Friday, oil prices settled down about 2% on Friday, ending around 3% lover on the week due to concerns over global demand growth after weak U.S. manufacturing data overshadowed OPEC-led supply cuts and sanctions on Venezuela and Iran.

“We have been the island of prosperity, globally, so if the economic slowdown is coming our way that is bad news for oil prices,” said John Kilduff, a partner at Again Capital LLC in New York.

Even more, a Reuters poll showed that analysts are more pessimistic over the prospects for a significant price rally this year, global fuel consumption is expected to dip this year in the face of a broad economic slowdown.

Asia is confronting with different kind of events over the region:

2. South Korea’s exports contracted at their steepest pace in nearly three years in February as demand from China cooled further.

3. Fuel consumption, especially in Asia’s developing economies which are key drivers of global oil demand, is so far holding up. 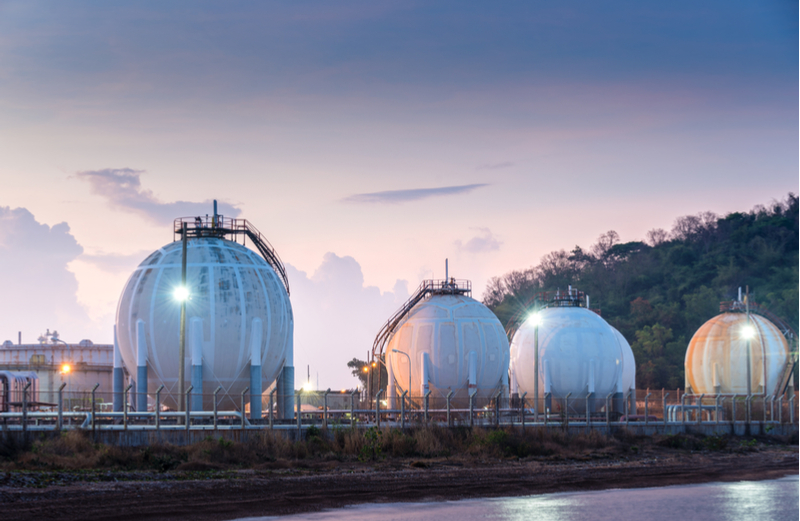 The NYMEX March natural gas futures contract climbed 6 cents Thursday after trending down in Wednesday trading. The March contract settled at $2.697/MMBtu, a 6.1-cent rise from Wednesday's close, and trading in a range of $2.639/MMBtu to $2.701/MMBtu. The April and May contracts were trading up about 5 cents from Wednesday.

Price movements appeared after the U.S. Energy Information Association announced a 177 Bcf withdrawal for the week-ended 15, more than twice the volume of the 78 Bcf withdrawal reported for the previous week-ended February 8.

According to EIA, Stocks are now at 1,705, sitting 362 Bcf lower than the five-year average of 2,067 Bcf. Inventories at this time last year stoodabout 4% higher than current levels at 1,778 Bcf.

Forecasts made by different entities show the following:

• S&P Global Platts Analytics data projects total US demand to drop off as the weekend approaches, falling an about 4.6 Bcf from Wednesday to 111.6 Bcf. This fall is driven by continued weakening residential and commercial demand as the end of winter approaches, falling about 4 Bcf on the day.

• Dry gas production is expected to dip for the third consecutive day to 84.9 Bcf and is predicted to inch up to 85.1 Bcf/d in the next eight to14 days, according to Platts Analytics.

After a Stronger than Expected U.S. GDP Data, Gold Ends At 2-Week Low

On Thursday, gold prices settled at a two-week low Thursday, as denuclearization talks between U.S. and North Korea ended up abruptly, while stronger-than-expected reading on the U.S. economy contributed to the metal’s loss for the month.

U.S. GDP grew at a 2.6% annual pace in the fourth quarter. Economists polled by MarketWatch had only forecast a 1.9% growth rate. The GDP number “was solid as a rock,” said Naeem Aslam, chief market analyst at ThinkMarkets UK. “There are no signs of slowing down and gold price eased off on the back of this.” 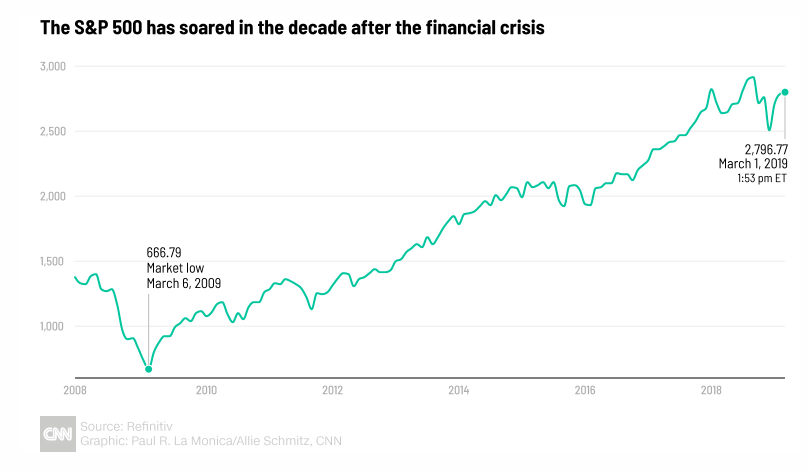 Image: S&P 500 has soared in the decade after the financial crisis.

Ten years later the U.S. indices are up more than 300% since they hit bottom on March 6, 2009. But now, that the 10-year anniversary is approaching, some are wondering how much longer the rally can last.

"What's happened in this rally is that valuations have crept back up," said Hugo Rogers, chief investment strategist with Deltec. "Stocks were oversold last year but now they are no longer cheap."

Now earnings growth is expected to slow this year and that could hurt earnings for huge multinationals in the Dow and S&P 500 — companies like Apple (AAPL), Caterpillar (CAT), Coca-Cola (KO) and Procter & Gamble (PG).

Although the Federal Reserve has announced that it will probably not raise interest rates this year, the U.S. economy may also start to slow because of the lag from prior rate hikes. "The markets may be topping out," said Randy Swan, CEO of Swan Global Investments. "The damage from the Fed's rate hikes could already be done."

European shares rose to five-month highs at the open of the first trading day of March as a fresh batch of corporate updates helped drive a risk-on mood after U.S. President Donald Trump earlier fuelled some concerns over trade talks with China.

Gains spread across all regional bourses and sectors. The only exception was the telecoms sector, down 0.8%.

FAANG: Facebook Says It Will Launch Its Long-Awaited Clear History Feature, While Netflix Stocks Are Expected to Rally, According to Analyst 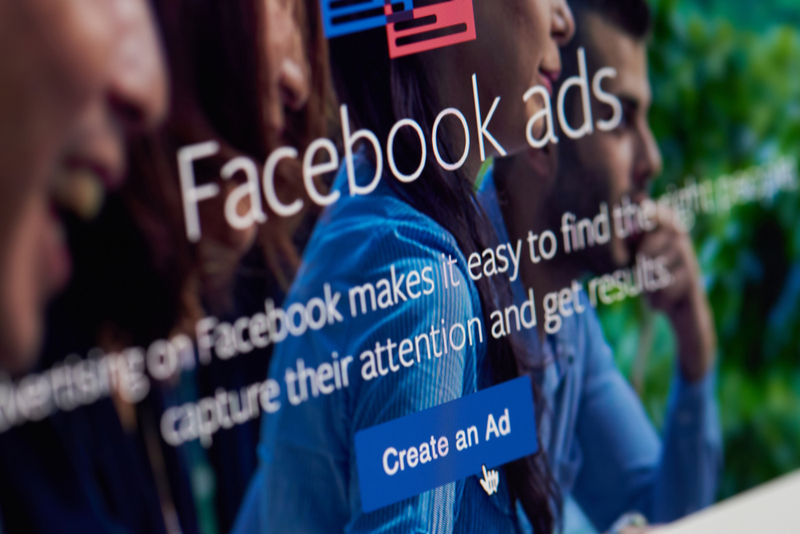 Image: Facebook’s ability to target ads might be impacted by new feature.

Goldman Sachs published a report on Monday which showed that more than half of large-cap mutual funds have outpaced their respective benchmarks year to date, higher than the 10-year average of 34%. They also added that it’s too soon to tell whether that will continue, but a peek into active managers’ portfolios shows their love/hate relationship with technology stocks, including Apple (AAPL).

The stocks with the five biggest increases in total fund allocation were:

The five stocks that saw the biggest declines in total fund ownership were:

Several retail stocks fell Friday afternoon following reports that Amazon.com (AMZN) was planning to expand its bricks-and-mortar grocery footprint substantially. The story was reported by The Wall Street Journal and cited “people familiar with the matter”.

Shares of companies including Kroger (KR), recently down nearly 3%. Several other companies, including Walmart (WMT), off just under 1%, also fell, though some recovered quickly, while shares of Amazon were recently up 1.4%, to $1,663.41.

An Amazon spokeswoman who was reached via email said the company doesn’t comment on speculation or rumours.

Several analysts believe that Netflix (NFLX) will rally because it can raise prices:

YouTube said it’s banning comments on some videos featuring minors, responding to criticism and the loss of advertisers after the service was used by potential predators to exploit children. The Google (GOOG) unit, one of the world’s largest video services, disabled comments from tens of millions of videos “that could be subject to predatory behavior” and will continue to identify similar troubling videos in coming months, the company said Thursday in an unsigned blog post