The S&P500 index advanced more than 2%, recovering all of the ground lost in the previous day and is technically forming a base in the area around 3,600.

As announced by the new economic chancellor, the British government completely reversed the fiscal plan that caused severe turmoil in the fixed-income market and had a knock-on effect on global markets.

The recent new government's economic project of significantly lowering taxes while maintaining spending has been abandoned, with which the criticism of the prime minister intensifies. Moreover, there is already talk that she is going to be dismissed by her own party through a motion of censure in parliament.

However, once the fiscal plan, which contradicted the current monetary policy of the Bank of England and the rest of the Western central banks, was left behind, the markets appeared to have calmed down.

The Bank of England was forced to intervene by buying bonds in the market to prevent the collapse of pension funds and insurance companies, which contradicted the central bank's plans to raise interest rates to combat inflation while reducing the bond portfolio.

The yield on the 10-year British bond fell to 3.95% from 4.60% in the previous days. This is a clear sign of market normalization, which has had an impact on the global fixed income market. The 10-year US bond yield has also tumbled below 4%, which has been welcomed by Wall Street indices.

Another factor that contributed to the improved performance of the stock markets was the drop in the NY Empire Manufacturing figure, which fell to -9.10%. A bad figure for the economy, but it increases the likelihood of the Federal Reserve raising interest rates more slowly. From now until November 2, the market will be paying close attention to both economic data that may influence the Federal Reserve's decision and comments made by Fed officials this week.

The US dollar fell yesterday as risk sentiment improved, and stock indices rose significantly, fueled in part by corporate results, such as Bank of America's, which exceeded analysts' expectations.

The S&P500 index advanced more than 2%, recovering all of the ground lost in the previous day and is technically forming a base in the area around 3,600. 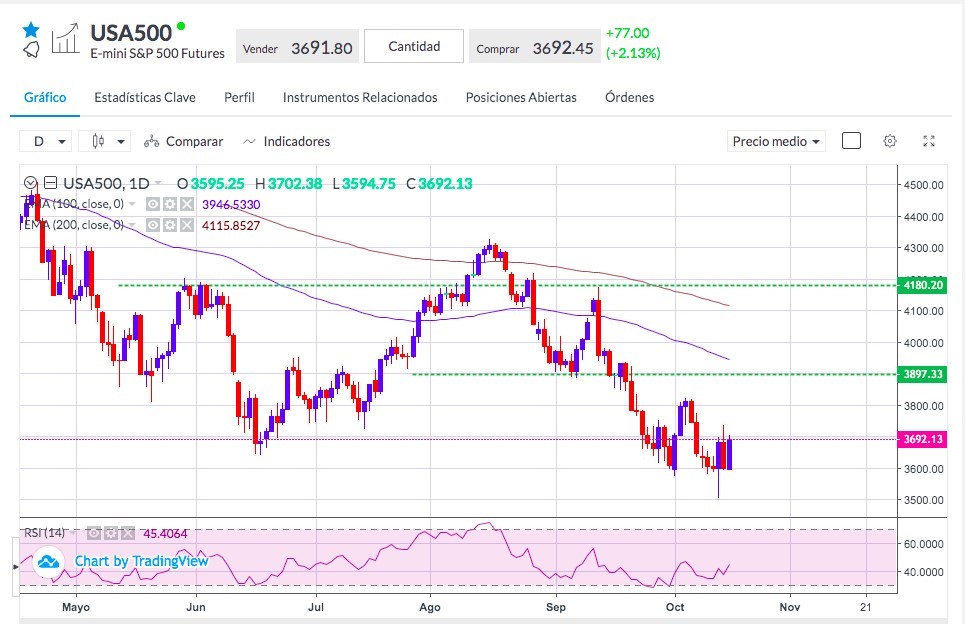